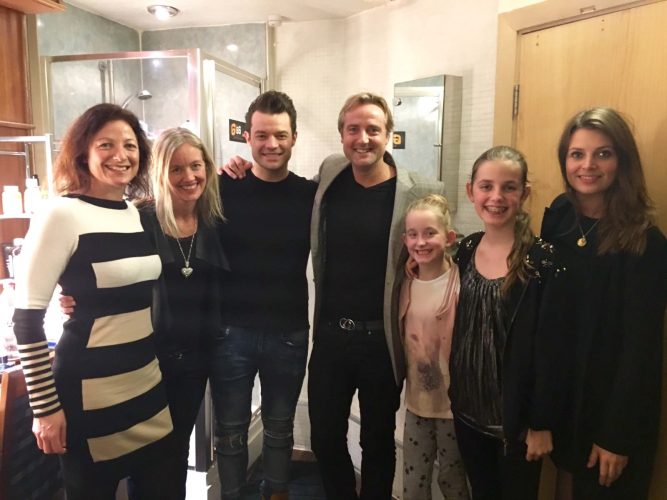 Last night our Incognito HQ team, and my daughters, went to see the hit musical, Jersey Boys, which features such well known songs as “Big Girls Don’t Cry”, “Sherry”, “December 1963 (Oh, What A Night)”, “My Eyes Adored You”, “Bye Bye Baby” and one of Incognito’s most loved songs to perform, “Can’t Take My Eyes Off You.”

We went specifically to see our sensational Incognito and Bravo Amici performer, Simon Bailey, rock the house as Tommy DeVito and, as predicted, he knocked our socks off with his acting, singing and dancing.  He was insane!

Simon first saw Jersey Boys on its opening night in London in 2008 and was blown away by its slick nature, pace and amazing music. Now being a part of the show, Simon says he’s the lucky one who gets to do that for an audience, night after night!
The story is incredible – told from four very different points of view from each of the ‘Season’s: Tommy, Bob Gaudio, Nick Massi and Frankie Valli – about a groundbreaking group whose career gave birth to some of the most famous songs on the planet, and one of the most unique voices the world has ever heard.
For Simon, playing Tommy is a dream role. Tommy is the villain of the piece but, for Simon, the interesting aspect was researching Tommy to find out WHY. Simon explained to us that, yes, Tommy has questionable methods but his whole modus operandi is survival – like he says in the show, “You’ve got three ways out of Jersey:  you could join the army, you could get mobbed up….or you could become a star“. Everything Tommy does is driven by his need to make a better life, even if that means going in and out of jail to do it!

Little was known to the public about the group’s history prior to the premiere of the musical, because the magazines of the era didn’t write about them much.  Other bands of the time projected street-tough images, but The Four Seasons cleaned themselves up in order to be palatable for mainstream listeners.
Simon hopes to meet at least one of the surviving, original Four Seasons by the time the show – sadly – closes on 26th March 2017, having run for over 9 years in the West End.

So, in brief, what happened to the Four Seasons?

As most of us know, Franki Valli continued his international singing career throughout the decades and is scheduled to perform at London’s 02 Arena in 2017!

And as for Simon’s Tommy?  In the late 1970s, his friend since they were 11, Joe Pesci (then unknown), came to live with Tommy for a few years. In Jersey Boys it’s said that Pesci introduced Gaudio to DeVito.  Pesci then wound up getting Tommy bit parts in movies, in “Casino,” “Gone Fishin'” and The Good Shepherd,” while also putting Tommy on his payroll a few days a week to “watch my back.” Another awesome Tenor for Incognito Artists and Bravo Amici, Andrew Ragone (who lives in Las Vegas) said that Tommy is still a legend in Vegas.

Oh, what a night.  My eyes adored it!  If you’re in London and you haven’t seen it yet, go! I urge you to see the STAR that is Simon Bailey.  And if you have seen it, go again before it closes to see Simon and the best of what the West End has to offer – classic, timeless hits and slick, inspiring, uplifting, draw-dropping talent.