By Charlotte Neales on November 4, 2015
Back to blog 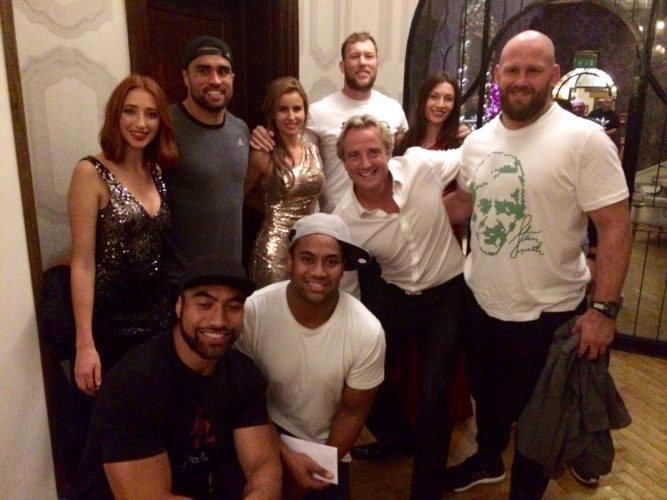 The All Blacks rang me (when I was on holiday in Mallorca with my family for a couple of days) last Monday and said they needed us to make them feel good, to put a smile on their faces, during such an intense week.

It was the pinnacle of my career. It can’t get better than that, can it?

They asked us to do what we do at their private team dinner, two days before the Rugby World Cup final at Twickenham stadium. They wanted us to lighten the load amidst the pressure of making history. (Which they did, in many ways, if you’re up with the statistics).

And they thanked us for doing just that.  One of the players even said it was their best team dinner, ever. They told us they’ll never forget it.

We’ll never forget it either. The pleasure and honour was all ours.

Three divas (Emma, Emily, and Kara) and I gave it our all to get them up on their feet, smiling, laughing, and dancing, to try to forget for 30 minutes anything else except to have fun with their mates.

Singing with Captain Richie McCaw two feet away from me and getting a standing ovation from such heroes was nothing short of mind blowing. But even more than that, speaking to them and their management team afterwards, and feeling all their positive energy, watching their dignified behaviour, and listening to their humble natures and inspirational stories… I was moved.

I was so affected by the interaction with them that when I gave an address before the NZ Prime Minister on the morning of the World Cup Final, I was moved to tears when discussing that evening. It’s hard to sing after you’ve been moved to tears, can I just say. But sing I did, the national anthem of NZ, with the help of my friends on the podium linking arms with me: Sir Lockwood Smith (NZ’s High Commissioner to the UK), Sir Stephen Tindall (hugely successful kiwi businessman and philanthropist extraordinaire), and the Prime Minister, John Key, as we were all united in our excitement, nerves, and patriotism.

Never has there been a nation or a team that deserves the accolades that NZ and the mighty All Blacks are receiving. For a small, beautiful country to deliver that level of excellence – when we don’t have many people to choose from in the first place – and we take on the world and win, is incredible.

Their ‘mind coach’ Gilbert Enoka and their ‘inspirer’ Willie Apiata, the first man to win a Victoria Cross for NZ, deserve special mention for helping the men in black understand the importance of their state of mind in preparation for this back to back Rugby World Cup victory.

As Captain Richie McCaw said (aka ‘the greatest rugby player in the world’ it is now claimed) it was ‘a matter of not panicking’ and of keeping their composure to come home strong.

Congratulations to the All Blacks, they succeeded in their mission – and meanwhile I’ll never forget that call-up to help them in a small way. They achieved their dream, and they made my dream come true of performing for and meeting such legends!

P.S. The All Blacks also reduced their sugar intake before and during the Rugby World Cup, according to their strength and conditioning coach, Dr. Nic Gill. And look what happened! It’s all connected. Whereas findings by dentists at the University College London, and published in the British Journal of Sports Medicine, revealed that nearly four out of 10 professional English footballers have ongoing tooth decay while 80% have gum disease. There’s a lesson to be learned here.  Simone would wax lyrical on this subject, as she’s a trained health coach, but that’s a whole different story.