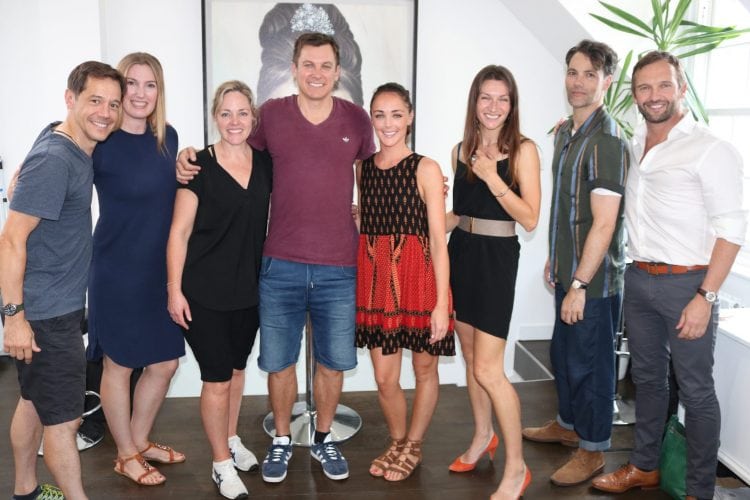 Brad Mooar, the Assistant Coach of the Crusaders rugby team in Christchurch, New Zealand (Champions of the Super Rugby Competition, 2017 and 2018) is a passionate, extraordinary guy doing what he loves and never playing it safe. Through the support of NZ Clubs and the NZ Rugby Union, professional rugby coaches in NZ do a lot of Personal Development work outside of the rugby world, learning from Masters of Their Trades in other industries.

You wouldn’t expect a rugby coach to sit down with a group of leading men and women from the West End stage and the world of TV/film to share best practice and find out the synergies between the sporting and entertainment arenas in order to do his job better – but that’s exactly what he did.

Brad was in London, with his wife Anna, on his way to a wedding. We organized for him to watch rehearsals of the musical, Rock of Ages, featuring Incognito Artists star, Jodie Steele; then spend time with a bunch of our wise, experienced performers to get the lowdown. And finally take in a show that night, Everybody’s Talking about Jamie featuring Incognito Artists star, James Gillan.

Brad was interested in thinking outside the square to unlock the potential of the Crusaders’ players and the whole team, and what transpired was an inspirational afternoon.

Over nearly three hours, Brad and our world-class stars also talked about performance prep, emotional recovery post adrenaline filled performances, keeping the faith, and supporting each other when not chosen post-audition, how to perform best under stress and what you think defines you when you’re at the top of your game.

I love Brad’s phrase he picked up from spending time with the Psych & Mental Skills team of the US Army Special Forces at Fort Bragg in North Carolina; they taught him, ‘slow is smooth and smooth is fast’, meaning that even under pressure, when it is literally life or death and people are shooting at you, communicate calmly and slowly to ensure the message is truly heard and the desired outcome or consequence will occur. That can be relevant to us all, including talking to men under high stakes on the side of a rugby field or working in a corporate environment when the stakes are very different but arguably just as high.

Brad and performers noted synergies and huge variances in their different industries. One significant similarity is that natural talent will only get you so far; it’s the work ethic that counts. Resilience is key. Brad said, ‘I believe you should play as if you’re in first place and train as if you’re in second’.

A marked difference in the industries is the care and support that’s prevalent in the sporting arena – physios and trainers to aid physical performance and healing, mental health support to enhance the crucial mental game or state of mind – but is sadly lacking on the stage in the UK, and sometimes in film or TV.

Performers at the top of their game in the West End don’t have paid physical or mental support – there is no recovery day after a big ‘match’, there is no team psychological care even if the actor is playing a dark character taking a toll on their psyche, no one asks, ‘how are you?’; there is no team physio taking care of physical stress and strain after hours of dancing or physical demands on stage; there is no trainer encouraging you to be in your highest peak form.              There is no HR department or mental health counseling, even though this job suffers the highest regularity of rejection or the fact that performers are often plagued with loneliness.

It’s interesting, given that Mental Health is a huge problem worldwide, with depression, anxiety, bullying and suicide being reported in the news most days.

In the UK, Spotlight and the Actors’ Union (called Equity) are now starting initiatives to address this, to tackle the bullying, loneliness and mental health issues rife in the industry. In the US, the Broadway Actors’ Union is very strong.

Community also supports mental and physical health. In rugby, you’re in a team. You aspire to be in ‘the All Blacks’, in general. As Aristotle said, the whole is greater than the sum of its parts.  Together, everyone achieves more. Brad said, ‘Consistent success in the Crusaders is driven through culture. We have worked hard at the club to achieve a good team’.

As a performer, you aspire to have a lead role. You aim to be the star, which is very different to being in the ensemble; for career purposes, job satisfaction and you’re treated differently, in every way, by the members of the Theatre Company, the media, and the general public. There can be a lack of team spirit or community.

You might be in a great ‘Company’ but ultimately you are your own business, watching out for yourself.

Tim Rogers, creative director at Incognito Artists and West End star, says that’s why working with Incognito Artists is helpful. ‘It’s great to be working with teams you know, where we all trust each other, within a lovely culture, on a regular basis. We are given this kind of expression, an opportunity for healing, and a chance to address the very issues we raised in this conversation’.

We loved Brad coming in and spending time with us and he valued it too. People at the top of their game, no matter what it is, share so much in common and the differences are just as insightful. Life is all about meeting new and fascinating people who excel in their fields to inspire us!

We gain interesting life experiences which enhance who we are and our ability to tell stories.