Home » Blog » That kid who fell in love with the game

That kid who fell in love with the game 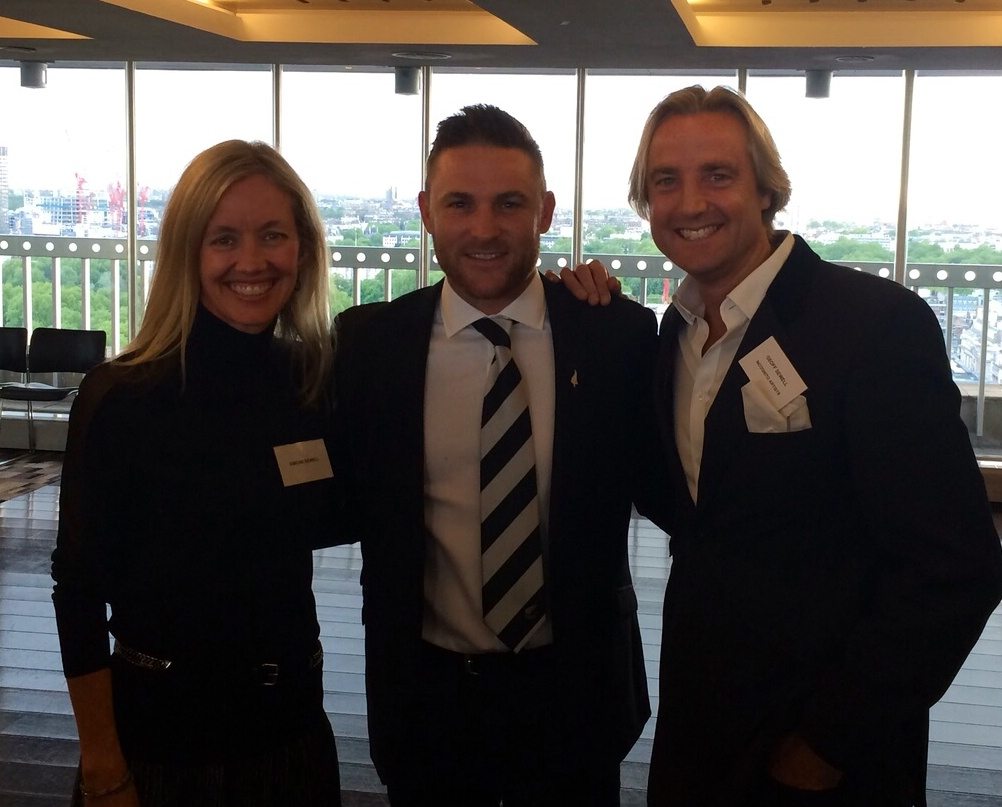 Last night I had the honour of meeting the current Black Caps (NZ cricket) team at a function hosted by the NZ High Commission and the London Kiwi Cricket Club at NZ House.  The boys are in town to play a two-test series against England starting at Lords this week.

The Black Caps captain, Brendon McCullum, gave a heartfelt speech about his team, “no longer trying to play like other teams but instead now playing like a NZ team, as positive and aggressive with our tactics as we can… desperate to try to achieve success for NZ, and everyone wanting to play like that kid who fell in love with the game”.

I was so inspired by his attitude, and the whole team’s spirit and performance during the Cricket World Cup, that I felt compelled to lead the assembled crowd in a passionate accapella rendition of ‘God Defend NZ’ following his speech. As you do.

When Sim and I spoke to Brendon (see photo) we were struck by how down to earth and friendly he was to yet another Kiwi fan like us, and how passionate he is about his beloved game.  He told us they’d had to ignore any media storms and climb back up after hitting rock bottom two years ago, acknowledging that back then they were ‘over-paid and under-performing.’  He explained their strategy, in line with their now much admired coach, Mike Hesson, was to get hungry and chase every ball, play in the right spirit and ‘if in doubt, take the aggressive option’.

Teamwork makes the dreamwork!  I had to utter a Geoff’ism because it was so fitting.  The ‘best captain in the world right now’ smiled.

Too right, he told us.  ‘Our philosophy is team before self’.

I know a lot of people would say I have a very healthy sense of self but I certainly agree wholeheartedly with his sentiment.  For years I’ve used that expression, ‘the whole is greater than the sum of its parts’.  I used to get in trouble saying that in the media, to describe Amici’s line up, with someone I worked with in my Amici days – she loathed the expression – but I’ve always felt it was relevant in so many situations.

Black Caps for one!  Brendon said there are many leaders in the team, not just him or the coach, which takes their level even higher out there on the pitch and adds to their success.

Incognito Artists, for another.  We’re only as good as the united teamwork between our customers, our office staff, our suppliers and our performers.  Together we all have to make sure we’re galvanized to achieve our common goal.  Not settle for mediocrity or complacency but keep reaching for the stars.

The chairman of the London Kiwi Cricket Club, Gerard Walsh, commented on this fighting spirit in his speech last night.  He mentioned a British soldier, related to a friend he knew, who had fought in WW1 at Gallipoli and Passchendaele alongside New Zealanders.   The soldier observed that in battle the Kiwis didn’t stand in front of you, or behind you, they stood beside you.  And Gerard told the Black Caps that the NZ public is not standing in front of them, or behind, but right beside them, in full support of our impressive team.

With this test series and many other sporting events in 2015 – and of course the Rugby World Cup in England later this year – I for one am very excited about standing alongside our national teams in support!

And let’s not forget this is relevant in business and our personal lives: I invite you to stand alongside each other to achieve common goals, find your own unique playing style which fits beautifully in unison within your ‘team’, and play with spirit!

Have a great week,