Home » Blog » Master of the house

Master of the house 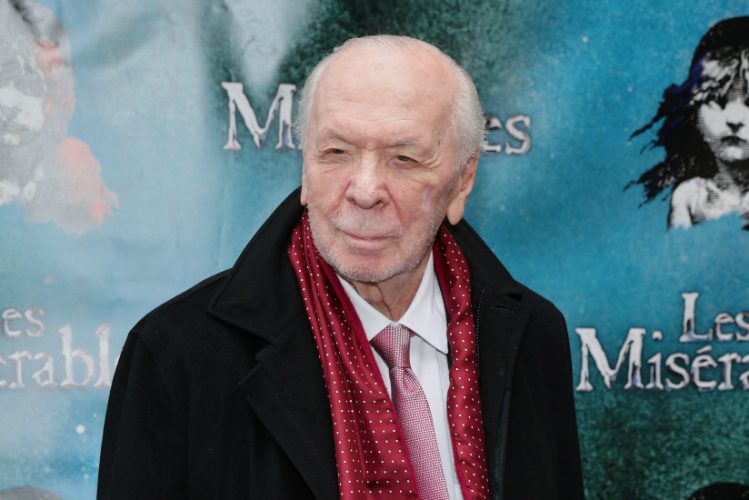 On Tuesday night, Simone and I attended the Variety Showbiz Awards, which have now been transformed into their inaugural Variety Hall of Fame, at the London Hilton Hotel.

It was quite the who’s who of the British entertainment scene, albeit with two Kiwis along for the ride, and a spectacular evening.

Among so many interesting people, there was one person in the room who totally captivated Simone and I: Herbert Kretzmer.

I’m moved just thinking about him and what his life’s work means to us: the entire English lyrics of Les Miserables!

Herbert is a class act.  Now 91, he was 60 when he wrote this world famous libretto; a newspaper man working for the Daily Mail who dabbled in writing songs from his kitchen table. A chance meeting with Sir Cameron Macintosh changed his life.  Sir Cameron remembered Herbert’s lyrics for ‘She’ and ‘Yesterday when I was young’ (written in the ‘70s) when he woke in the middle of the night, worrying about bringing his new show to life for the English speaking world.  He tasked Herbert with the enormous job of not only creating new material for the London version, which would be a third longer, but to re-write nearly all the existing material. The result is the longest running musical in the West End, the second longest running musical in the world, which has played to over 60 million people in 42 countries.

Herbert told Simone, “You’ve gotta bring something to the table.  You have to be confident.  I believed I could, that it was in me, even though I was just a newspaper man”.

Clearly, Herbert is our kind of guy!  The way his words inspired Sim and I since we were teenagers is humbling enough, the inspirational value of meeting the guy and getting his take on life was stratospheric!

Sim asked him about Jean Valjean’s, ‘Bring Him Home’.  Our Timmy Rogers does a cracking version in our concerts, step aside Alfie Boe, although we all bow to the great Colm Wilkinson, who incidentally just rang Herbert last week to say hello.  Herbert said that if he was a religious guy, Bring Him Home, would have him on his knees.  He said he’s proud of all his songs but this one has a special place in his heart, written in a rush between 2am-4am one night.

Graciously, Herbert delighted us with stories about his writing process: ‘On My Own’ was the last one he wrote; one of his favourites is ‘Master of the House’ because of the comedy and how much fun it was to write; ‘Empty Chairs at Empty Tables’ started with an image in his mind of Marius alone in a once-crowded space; ‘One Day More’ was built like a lego set by Boublil and Schonberg, composed of layers and layers which Herbert’s poetry  fed into.

Sim and I were so moved, I am still as I write this, to hear how such masterpieces come to life by a stroke of genius.  So many examples of this in the world; how lucky are we to enjoy them all but to also be allowed to sometimes get a sense of the gloriousness of the master at work.

Herbert has a son, a daughter and two grandsons, and said he’s been blessed with the love of two great wives during his lifetime.  His beautifully elegant wife Sybil was at his side throughout the evening.  He told us he doesn’t wish to sound smug, just grateful. “I have no regrets.  I’ve done what I wanted to do in my life.  I’m lucky”.

When we asked him, ‘what is the secret of a long and happy life?’  he was quick to reply:
LOVE WHAT YOU DO!

What a guy.  We’re singing from the same hymn sheet!  Herbert is living proof that it’s never too late to dream a dream.  My defining achievement could still be decades away!  What about yours?

What an awesome example of a legend who has lived, loved, learned and left a legacy.  And he ain’t done yet! Herbert, you rock.