Geoff Sewell, Tim Rogers and fabulous Incognito Diva Kylie Watt sang for the Tennis Stars at the Gala Dinner for the Zurich Open.

Known in the tennis world from his previous performances at Wimbledon and the Davis Cup, Geoff was asked by the Swiss tennis foundation to come along and perform some songs from his recent album, ‘Believe’.

But as an added extra, up popped Kylie as a guest and Tim as a Chef to perform a fantatsic classical crossover show in front of the tennis champs and 370 guests. 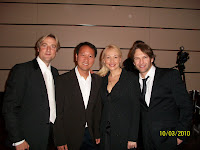 (Geoff Michael Chang, Kylie and Tim)
The Zurich Open features past and present tennis champions from all over the World. The team performed a fantastic show in front of Richard Krajicek, John McEnroe, Michael Chang, Goran Ivanišević, Stefan Edberg and Henri Laconte. 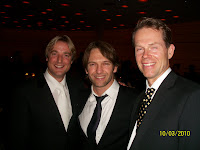