By Josephine Slade on December 1, 2016
Back to blog 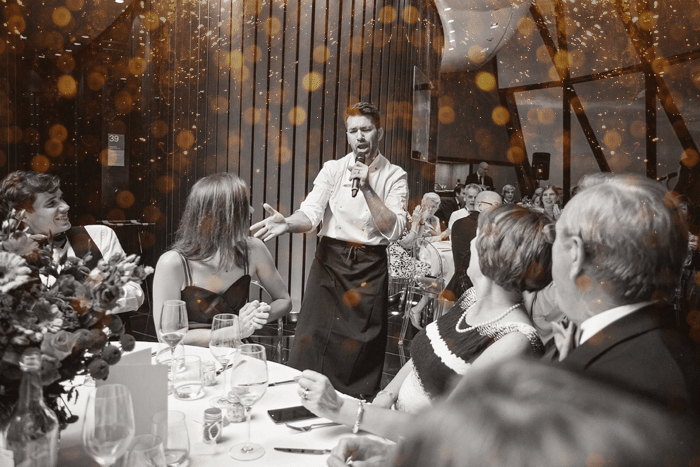 …You’re finally at an event which you’ve been excited about for weeks. You’ve been casually sipping out of champagne coupes all night, and there’s no need to stop, as there appears to be an abundance of waiters with trays of drinks circulating the room. The party is rockin’ and you’re having a fabulous time but you seem to have found yourself stuck in deep conversation with old ‘Hector’, about the air pollution issues in London. Suddenly one of the waiters bursts into song. The room is shocked but there’s a new buzz of excitement in the air (and you’ve been rescued from Hector!) Then another waiter joins in, then another and they reveal themselves as three West End stars from Incognito Artists, masquerading as singing waiters. What a surprise, what a performance, what a night!

Show-stopping performances have always been fundamental to the Entertainment industry, but Incognito Artists took it one step further. Tenors Incognito were the first group in the UK to introduce the singing waiters act. And what a gift it was to the world of British Events Entertainment – or so we’ve been told! Incognito Artists have always been, and still are, the best in the industry for surprise entertainment due to their innovation and passionate, professional performer portfolio, made up from the finest lead singers of the West End and Broadway. These superstars are ready to melt hearts and blow minds at your special event.

Incognito Artists’ singing waiters have proved to be a huge hit, with awesome testimonials from big names including Sir Elton John, Prince William and Elle Macpherson. Not only is it a great idea to use the waiter alias to ensure a huge surprise, it’s also really convenient! Most people have waiters at their events, whether it’s for serving your dinner, handing around canapés, or making sure everyone is kept topped-up. However, Incognito Artists like to create an event which is tailored specifically to you and your entertainment desires.

So, if a singing waiter is not quite right for your party, why not try something a bit different; a great accompaniment to your singing waiter could be a singing chef. At your event you could have a singing guest or a cheeky photographer who bursts in to song!  For an event at a museum, why not a singing curator or a janitor. The possibilities are endless and our performers can pretend to be whoever you like!  Their amazing voices remain just as amazing.

The lesson is… never underestimate your waiter…